Don’t you miss the old days? Back in the 1800s? When putting dead animals on your head was the trend. You could walk into any back yard, front yard, or community garden and kill anything that moved--raccoons, squirrels, lions--and then skin it for the latest in wildlife fashion. You would parade around town with your royal freshness while the townspeople applauded your kill in their wagons. It later became uncool, as more and more people began giving rights to animals. This meant that the common peoples had to switch from animal based hats to bandanas and durags which soon led to the rise of gangs and street violence based on colored headwear. 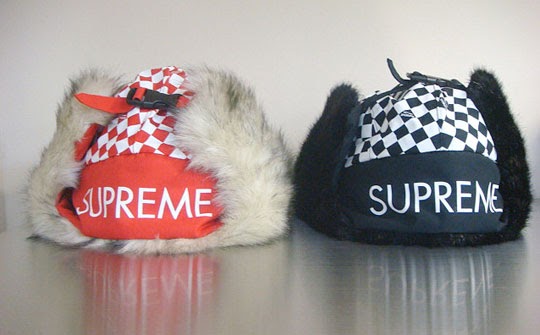 In Russia, hat wears you!

Luckily, Supreme made animal print hats popular again in the 2000s when they dropped the Mongolian/Russian/Alaskan-style-hunter hats with the furry flaps that made your ears sweat like a lumberjack’s balls. Between these and the North Face bubble jackets (oftentimes interchangeable with the more elite Steep Tech favored when climbing the icy mountains of the Lower East Side), winters were never the same again.

And if we’re talking about the 2000s, you can’t leave out New Era fitted hats. They came in a bunch of ambiguous sizes that you could never really figure out something like 3/4 or 6/8. It really took a degree in math to figure out which fitted you could rock without looking like a bobblehead. If you were short and had a big ass head, you’d walk down the streets of New York and people would think you were either the Mets mascot or a lost astronaut with that helmet of yours.

The hype over fitteds eventually died, probably cause people were tired of spending $300 on 10 hats just to figure out their size. What if you decided to grow your hair out or your head grew larger as the veins in you face swelled up as you stressed over how you were gonna buy another fitted? Your current fitted would stop fitting. You’d have to call it titted, short for “tight fitted.”

Not only were they “one size fits none,” rappers and athletes kept forgetting to rip off that gold and black sticker that adorned the brim, so much so that it became fashion statement to leave the sticker on. You’d be able to look at someone’s face, read their sticker, and know how big their head is therefore you’d have an idea for how small their brain is. This led to numerous cases of workplace and educational discrimination. You gotta respeck the small brains, they make the bigger look better (that’s what she said).

The only fitted I’ll ever need

As the new generations struggled with the insanity of fitted problems, a timeless class of skilled artisans came together to relieve the world of it’s fitted woes: The Hatmakers.

The future looked bleak, hopeless, and apocalyptic. The genius hatmakers of the world knew there was only once place left to look for the solution: the 1980s. It was the era that gave us Michael Jackson, video games, crack cocaine, and the snapback.

It was simple: regardless if your head was the same size as Spongebob’s left nut or as big as Kanye West’s ego, you could still wear the same hat.

The functionality, simplicity, and versatility made it the ideal hat. Trading vintage snapbacks became popular too. It made you feel like teenager who hadn’t yet discovered pr0n and instead collected Pokémon cards… except instead of getting holographic cards as bonuses, you got lice and a smelly ass yellow-brim instead.

Rappers adopted snapbacks like children that weren’t theirs. They were the perfect replacement for fitteds, like getting a side chick after leaving your wife for your other side chick. And as they normally do for their side-side chicks, rappers decked their snapbacks in luxury fabrics--alligator skin, crocodile skin, emu skin, maybe even human skin. Now maybe if these features were available for condoms, they’d be used more.

The luxury snapbacks were heavy on your head because of the leather, which created a personal sauna for your head. Who needed to shower when you can get a nice, wet head from a 10-minute session in your snapback head spa? It began to feel like the Mongolian/Russian/Alaskan dead-animal hats again. At least now you’d sweat golden bullets cause you fresh AF looking like you in a Gatorade commercial. As an added bonus, the snapback weight matched the oversized faux-gold Canal St. Rollies (fake Chinatown Rolexes in case you ain’t fresh as us) and brass Jesus Pieces encrusted with cubic zirconia for that extra bling bling.

After all the flash, it was time to settle down. Thus emerged the newest trend of our time: DAD HATS. It started with the normcore aka the people who wear basic shit from Old Navy & Gap. You’ve probably noticed them at your local organic supermarket in those pastel green shirts that look like they came off the back of a wholesale truck. Or maybe you’ve spotted them waiting for a green light to cross the street in their local KMart Route 66 dad jeans with the wide flare at the ankles. Better yet, you’ve noticed their chic Birkenstocks paired with basic white socks (and a complementary yellow stain) to cover up some funkytown toes. These lifeless & soul deficient outfits needed a cherry on top: the dad hat.

Dad hats became trendy cause they weren't trendy, thus making them trendy. You could call it Hipsterception because it's hard to track where the cycle of trendy starts. Dads wore it first, therefore out-Hipsterizing the Hipsters that often claim they “did it before it was cool.” We’re Hipsters too cause we did your mom before it was cool and now everyone wants her. You’re Unwelcome.

The days of fitteds and snapbacks were a time when the straightness of your brim was a measure of the size of your penis. And by penis, we mean how hard you were. Not hard as in erect but how hard was your gangsta.

If you came up like we did (straight hood bruh), you'd buy the knock off fitteds that came with curved brims. You'd then straighten them the fuck out like how our parents straightened us out when we cussed and put no respeck on their names. The easiest way to straighten the brim was to get it wetter than your girlfriend and then clamp it in between two textbooks from school, the ones you never read because you sat next to Pablo and Pablo is one smart motherfucker who's cool you copying his answers--you the real MVP Pablo. You'd have straighten it real careful too or else you'd get the crack and fabric wrinkle in the center looking like Moses split your brim. All your friends would clown you for your fake shit until you’d call them out on their fake Jordan 1 Retros like “You better off rockin Toms bitch. Buy a pair, give a pair bitch.”

But thanks to Hipsters, there’s no more chance to fit in unless you get the “official dad hats.” Hats that can retail for prices you wouldn’t even tip a waitress for blowing you in the bathroom of her boyfriend’s restaurant. Support the OG dad hats from your local tourist shop i.e shit your dad would actually wear to cover his bald spot. Or the type that redneck, turkey chasing, Nascar loving white people usually wear to show their support of what matters to them. Their dad hat loving behavior is the reason we can “Make America Great Again.”

If you do need a dad hat, you'll find some real legit hipster shit in lowkey tourist towns with their signature exports such as lobsters from Portland, Maine or surfboards in Redondo Beach in California. Keep it simple.

And for all the homies trying to keep it Unwelcome, we got a dad hat too, check that shit out.